The Home Front refers to British civilians' contributions to the war effort. The Second World War began in September 1939. But the Government had been making plans for the Home Front for a year prior to the outbreak of war. Neville Chamberlain stated in October 1938 that 'when war starts... in the very first hour ... it will strike the man in the street, or in the bus, his wife and children in their homes'. The people had to be watchful and prepared.

The Home Front was necessary to protect the British public, to motivate them, to encourage them, to raise morale and it was vitally important in the struggle to win the war. Government intervention in civilian life was unprecedented it was involved in every aspect of daily life on the Home Front.

Civilians were subject to necessary controls, many were also recruited into the Local Volunteer Defence Movement and this is reflected in the recollections of the residents of wartime Marsden. Everyone was involved in the war effort. In 1940, J B Priestley said,

'For this is total war, and total war is war right inside the home itself.
Emptying the clothes cupboards and the larder, screaming its threats through the radio at the hearth....' 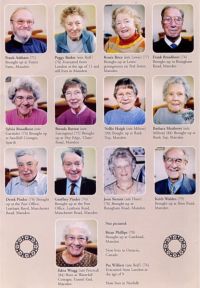 These pages are based on a booklet which brings together the memories of people who were in Marsden during the Second World War. Some are born and bred Marsdeners and some were brought here by the War itself; some were just children and some were at work. It is designed to give a picture of what life was like at that time in the Pennine village of Marsden.

We are grateful for the help of Kate Button, Isobel Holland, Dave Pannell and Shirley Simmons and to Jenny and Doris at Friend to Friend.

Thanks also to people who have entrusted photographs to us: Renée Brice, Alan Matthews, Geoffrey Pinder, Derek Pinder and Pat Pye.

Most of all, we would like to thank the people of Marsden who gave freely of their time to talk to us, and who shared their